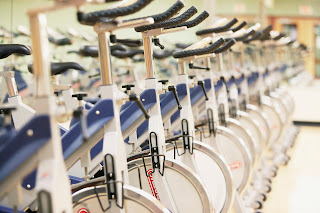 I was quite late to my Friday morning RPM class; although I still managed to make it in time to set up my bike before class started.

The Wednesday and Friday morning classes are two of my favourites as I love Brett the instructor. Since starting his classes a few weeks back I realise that I have started pushing myself harder and harder in each class. I think he said something along the lines of “turn up your resistance and push hard otherwise you will not change”…so I did.

So…favorite class, favourite instructor, half-full RPM studio and one person that made me feel incredibly insecure and uncomfortable.

Before we started I noticed this man looking over in my direction and it made me feel really squirmy and uncomfortable. I then noticed he kept looking over my way. I actually mouthed fuck you at him. Obviously, lip-reading is not in his repertoire and he kept glancing over at me throughout the class.

When you are the largest person in the class you cannot help by take it personally and that his glances were ones of disgust and “are you going to have a heart attack and die in my class”. It is either that or he was amazed by my awesomeness!

Can I just ask if you are disgusted by me and the way that I look that you just 1. Concentrate on your own workout and 2. Consider that I am in a class at 6.10am in the morning when it is freezing and wet and I am actually doing something to change my body and my life.

You did not put me off as I love these classes and have been doing them consistently each week for about 2 months now. I actually just think you’re a loser.

Here’s another blogger who had a similar experience while doing Bikram.


In less than 3 weeks I am going to South Korea for almost a fortnight for work.

It is still pretty unreal that I am going there as I have never wanted to travel to Asia at all. When I found out that I would be going I had a wee drama-queen-meltdown moment. The next morning I realised that none of my reasons were sound business cases for not going.

I will miss the final week of our MotivateMe NZ Shake Up; however that is better than missing the two weeks I was originally going to be away for. It also means that I get to do some more RPM and Pump classes before I leave. I wonder when exercise became a bit more of a priority in my life?

I am going to miss Mark and the cats like crazy; however I know that they will be fine. I also start disaster planning in case something happens and I do not make it back home safely. Mark never wants to talk about it however I always say “please do not put the cats down and you can live with mum until you are back on your feet”. He just rolls his eyes and probably considers me to be a drama queen.

I have decided that when I am not working that I will try and see as much of the city as I can; it is a once in lifetime opportunity. I have promised my Shake Up trainer that I will find stairs while I am there and train on them like a crazy person.

I am going to try new foods even though I will be a practicing Pescatarian while I am there as I do not want to risk eating something I would rather not. I thought that trying a Korean restaurant before I leave Auckland would be great!

I really should watch the Gangnam style music video considering I will be able to visit the Gangnam District.

At least it will give me a lot to blog about when I get back!

So even though I am still a bit nervous I am going to welcome the change that being in foreign country will bring.
Posted by Ness at 1:20 PM 2 comments

I am pretty sure that 2013 is the first year for Mazda ORockand it is run by Mazda and Horley’s; the same companies that run the Sculpt 6K in November. I actually signed up in December when I was obviously delusional from being on holiday.
As the 12th May got closer I got a bit worried; not so much about the distance as 6K but the obstacles and what they would entail. I was worried about the obstacles that would involve climbing over up and/or over a wall.
The really great thing is that I was there with other MotivateMe NZ members; so supportive! We even had two members come along to cheer us on and take photos; thanks Hinerau and Kathryn…you rocked! This was also the first event that I have let Mark come along to, to support me which was great.
We checked out the vertical wall which I realised would be the hardest for me to do. I immediately knew mentally that I was going to start to talk myself out of it. I am never going to be critical of The Biggest Loser contestants that have a meltdown and do not want to do a challenge!
I started off running and then slowed to a walk when I was out of breath. Then I ran bits throughout until I was too exhausted. What I can say is that I now know that in order to complete a half marathon I need to do so much more training. I also need to incorporate a lot more strength training with weights and cross-fit/body weight type exercises.
So in the end I missed two obstacles the vertical wall (pulling yourself by a rope) and a vertical climb over a wooden frame. I realised that it is such a mental thing and the wooden frame was definitely strength and my own mind holding me back. I attempted that damned frame about 2-3 times and just could not get my leg up to get myself up on top of it. I could also envisage myself crashing down and crushing the poor man that was trying to help and encourage me over.
The gals came and met me and finished the last 1km with me which was fabulous.
The fireman’s pole was hilarious. I got up the ladder and when I was on top of the container I though “um shit, this is higher than I expected…how the hell will I make it down that pole”. Nic was up there with me and explaining the technique and I just thought “just do it quickly and do not over think it”. I landed with a hell of a thump and I swear that my pelvis ended up in my throat.
Also, I found out afterward that the guys giving me Zombie high-5’s were my second cousins. To the 2 women that helped me over the smaller wall; thank you. To the gorgeous woman that helped me get off the car...you rocked!
What I have learned is that you can do anything you put your mind to if you train and listen to your body. Could I have pushed myself harder? Absolutely. Do I need to train more for obstacles? Definitely. I am going to start finding school playgrounds with obstacles and gain strength and confidence.
Do not just think it; do it!
Oh and I just checked the results and I did not come last!
Posted by Ness at 10:00 AM 0 comments

RPM and Shake Up 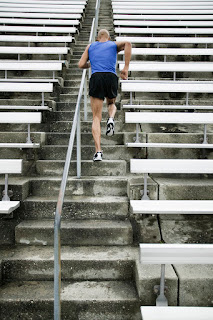 If I have not said it before I will say it again…I love RPM!
It has taken me a bit to love the gym again and RPM has been the perfect thing to help me get back into it. Also, Pump with Tara on a Tuesday night has been a refreshing way to add a touch of resistance training back into my week.
This week was the first week back into Shake Up Training with Motivate Me NZ with our wonderful trainer Delane (you can read about him here). We only have 5 women registered this time around which is great, however it would be good to have a few more beautiful West Auckland women joining us for the rest of Autumn or looking at Winter/Spring and Summer. You can find out about this on Motivate Me NZ website.
Given that Monday was very wet, Lesley and I were a bit apprehensive about Tuesday’s weather…it was fine!
We did a bit of boxing and a lot of stairs. Can I tell you all that I hate the stairs with a passion? On Thursday we did them in the rain and I said to Delane “seriously I have been doing exercise and these f*cking stairs are still killing me”.
I woke up early Wednesday morning and realised that my legs were killing me and then at 5am when my alarm went off I had to do some serious self-talk to get my butt out of bed to go to RPM. I made it and going to RPM and flushing my sore legs was probably the best thing I could have done. Plus, I love the instructor at the 6.10am RPM class at Britomart. His name is Brett…he is awesome!
I had to do some serious stretching on Wednesday night (including the foam roller) to help my legs. I could barely even sit on the toilet. Still, probably not as bad as the first time I did Shake Up.
Friday morning my alarm went off for RPM and I just could not bring myself to get up. My muscles have pretty much recovered; although my calves are still a bit sore. I am sorry Brett for missing your Friday class.
The other thing that I did this week was buy a voucher for 3 x Bikram classes. I figured it would be a good way to give this style of Yoga a try and hopefully I want to continue. I have just recently started following an amazing blog about a woman who does Bikram Yoga; if you have some time you should read it! You will laugh, you will cry, you will be able to relate!
Battling Bikram Being Big
Exercise this week:
Monday and Wednesday:             RPM
Tuesday:                                              Shake Up and Pump
Thursday:                                            Shake Up
Friday and Saturday:                      Rest and Recover
Sunday:                                                O Rock
Posted by Ness at 9:13 AM 2 comments